Updated disclaimer: (I should have spoken to this in the original post)

I have received some comments regarding the negative history of Mr. Dotcom. I should have explained that while I truly appreciate the generous storage space of 50GB, I do not in any way condone any of his behavior in the past. Only time will tell whether this service will become a mainstay like Dropbox and Skydrive.

In terms of piracy, there is a fine line of what should or should not be shared. Sharing files has existed for years. Borrowing a CD from the library and ripping it to your PC, is that ok? As for teachers, so many files are now shared with each other everyday. Do the original authors of these files get any credit or even recognition?

In terms of the actual service, the features of Dropbox are still much better. You can not set up a local folder on each PC that you own on Mega. Update a file on one computer, and your file will automatically be updated on all PCs the next time you open it. Mega says they are working on something like this.

In conclusion to this disclaimer, upload files that you want to back up, but perhaps don’t let this be your only backup. Don’t participate in sharing anything that would promote piracy, but instead share files that you create to colleagues that could also benefit from them.

Here are some articles discussing this issue if you are interested:

Forbes: Is Kim Dotcom’s MEGA just for Pirates, Or do we all need a privacy company?

Leave me any comments regarding this controversial issue.

Internet entrepreneur Kim Dotcom (yes, that’s his real name) released a brand new online storage and sharing service last week called Mega, and it has been a huge success. More than 1 million users registered for it within the first 24 hours. Not only is it completely free, everyone with an email address can immediately receive 50 GB(!) of storage free of charge. Putting that into perspective, Dropbox gives you just 2GB and Apple’s iCloud and Box offers 5GB.

This is a no-gimmick, no referral service. Everyone gets 50GB right off the bat. With Dropbox, even after three years, I’ve managed to receive 23 GB of free storage, and that number is probably higher than most users.

Mega also boasts file encryption during the upload process, meaning no one can access your files without your permission.

Here is a look at the web file manager and what I’ve uploaded so far to Mega.
I have not created separate folders just yet.
I have just uploaded some work files that I plan on using in class: 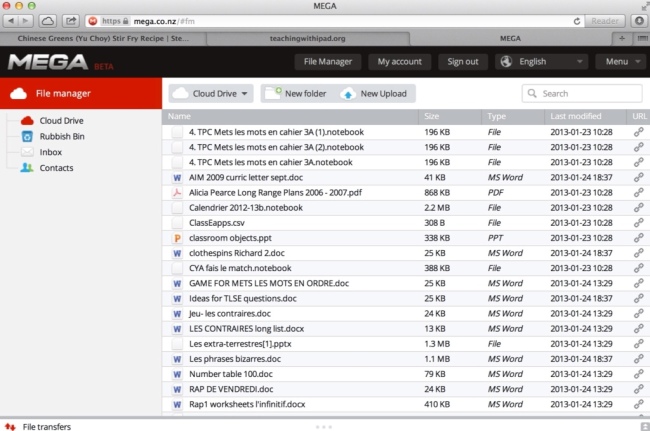 Not to say I won’t use Dropbox anymore. It is too engrained in my daily workload. I plan on saving larger video files and family photos on Mega.

I look forward to when (or if) Mega can succeed in the mobile app world as well. We will see if it can sustain success with our iOS devices. Sign up for a free account here.

Note: Mega prefers non-Hotmail email addresses and non-Internet Explorer browsers. Use Google Chrome or Firefox on a computer. You are currently not able to sign up for an account from an iPad.

I have yet to share anything yet on my Mega account, but uploading is a cinch: simply drag and drop from your desktop or any other folder on your computer.

Mega promises an iOS app very soon to manage files. We will hopefully see integration within apps, like we currently do with Dropbox, Box, or Google Drive.