Premium Apple mobile and desktop accessories maker Twelve South recently sent me a couple of their best-selling products for review. I have always been a huge fan of Twelve South and their products.

Twelve South was able to provide me a couple of their superb items from their lineup for review.

First off is the ParcSlope, made for all types of MacBooks and also for the 12.9 inch iPad Pro.

The ParcSlope is made of aluminim, and is a very sturdy and well-built stand. It is quite heavy, weighing in at 3 lbs, and this will not move on the table surface at all. Rubber stops at the bottom of the stand will both prevent it from moving and protect tabletops from scratching.

Typing on the MacBook Air at this angle is a pleasure. It (obviously) makes the screen higher and easier to see from your sitting position. Having the MacBook at a raised position also allows better airflow underneath it. 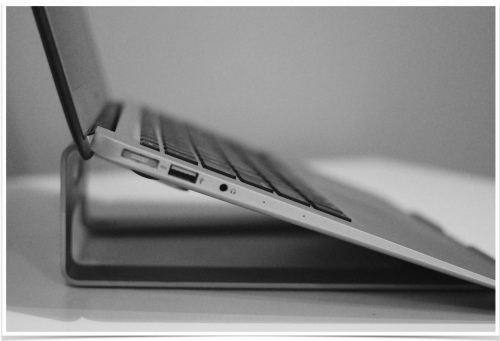 Actually having my MacBook Air on the ParcSlope made me want to work on it more often, which will in turn make me more productive during the week. My palms rest comfortably underneath the keyboard. The raised screen feels more natural for my eyes as well. It is now eye-level, and I find myself looking straight forward while sitting.

The attention to detail is impressive. I like the bottom “opening” of the rubber lip on the bottom ridge. This not only lines up with the MacBook Air perfectly (see pic below), but also allows easy opening of the MacBook while on the stand: 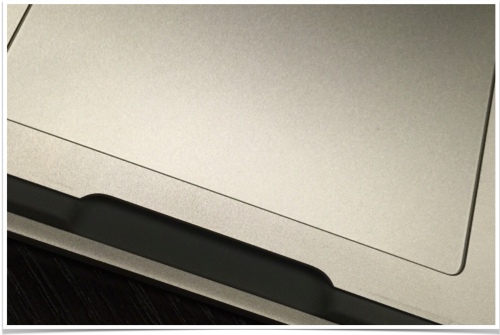 The rear of the ParcSlope has two dedicated holes for cable-management. No one likes cables flying around everywhere. Keep your work area clean with these holes:

The ParcSlope has been out for a few years already, so they didn’t have the iPad Pro in mind when they were conceptualizing it. However, placing my iPad Pro on this stand was just as much of a pleasure as the MacBook Air was. Working at the same 18 degree angle is much better than lying the iPad directly on the table. Typing on the touch screen is easier on the wrists and palms, and using the Apple Pencil with the ParcSlope feels natural. It places the iPad at the perfect angle for artists. It definitely beats trying to work on the iPad while it is flat on the working surface. Like with the MacBook, the rubber on the stand will prevent your iPad from ever touching the aluminum.

I love that, with both Apple devices, the rubber material protects them from ever touching the aluminum material. I don’t have to worry about scratching them, even without a protective case on either. Owning both an iPad Pro and MacBook Air makes this device a must-buy and an overall great accessory. Its simplicity, style, and solid build will make this a staple in your home or office for many years to come.

Another great feature of the ParcSlope that my wife suggested is that you will prevent any damage through spillage if your MacBook is on it. We recently said goodbye to our Retina MacBook Pro, due to a very unfortunate spilled cup of water. The entire contents of the cup spilled helplessly onto both the keyboard and to the rear casing, rendering it dead. With the elevation that the ParcSlope gives, any sort of spillage will very unlikely yield the same result. Since the rear is obviously raised, chances are water will not enter it.

ParcSlope is compatible with all generations and sizes of MacBooks, and the iPad Pro. You could technically use it with the iPad Air, but the stand does seem a bit big for it. The ParcSlope should (and will) outlast your next few generations of iPads Pro and MacBooks.

The ParcSlope retails for $49.99 USD and can be purchased directly from the official website.

Packaging for the ParcSlope is extremely well thought out. Twelve South takes pride in their products, and it shows. The box is professionally made and they encourage their customers not to throw it out, instead giving a few suggestions on what to do with it:

Recently hitting 1 million views since the inception of teachingwithipad.org, I would like to celebrate by doing a few great giveaways in the next few weeks.

Since you have read all the way to the end of this review, I'm going to try to give this away to one of my lucky readers. If I can get 200 people to share this post across all social media platforms, I will gladly send this away to one lucky person.

Here is how to have a chance to win:

Keep an eye out for the comments to see if you've won!

Please stay tuned for another review of a Twelve South product in the next week!