The iPad mini was released in stores today. I went in to my neighbourhood Apple store, curious, to check out the hype myself. My friend had texted me in the morning and told me that he was quite impressed with it, stating, “Having held one (the mini), it makes the original iPad very heavy.” As usual when a new product was launched, there was quite a group crowding around the table of newly release iPad minis. The tables containing older devices (old iMacs and even the MacBook Airs) were empty. 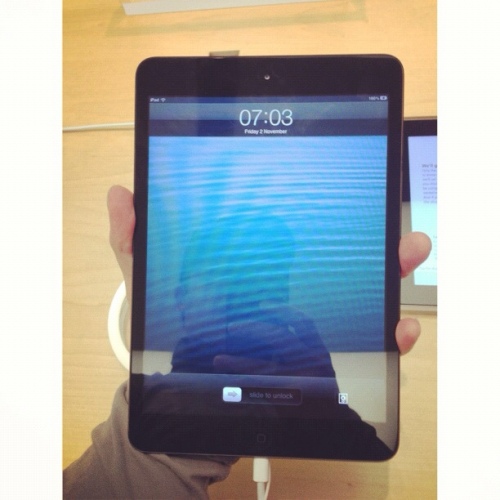 The iPad mini is incredibly thin and sleek; it is lighter than you can imagine. This would be the selling point for me. My wife originally didn't see the point of the mini, but after having held it, she was interested and very impressed with the size and form-factor.

The weight is what impressed me initially. It is a lot lighter was a little skeptical about the resolution (non-Retina), but the display really didn't look too bad. Pixels are definitely viewable by the human eye, but they are a lot smaller compared to the iPad 2. Only owners of Retina-display products (iPod touch, iPhone, Macbook Pros) will notice the difference. App icons were scaled a bit smaller to be able to fit four horizontally and five vertically (the exact same as the iPad).

Comparing the size of iPad mini and regular iPad

The fact that the iPad mini will be able to run all 250000+ apps already developed for the iPad makes this device a far superior one to its competitors. I still think however that Apple will release a Retina version in the near future. We will see whether this comes true. A Retina Display iPad mini would be, for me at least, a must-buy.

If you do not have an iPad yet and do not want to buy the newest fourth generation iPad, I would recommend getting the mini over the iPad 2. Both front and rear cameras on the mini are much improved, and you also get Siri. Having said that, I just read that the US Apple online store is now selling refurbished iPad 2s for $319. Decisions, decisions. I would still go with the new product.

As a teaching tool, it probably is negligable which one would be better. For the sake of reading the iPad as a manual and teaching guide, the larger one would make more sense. But if your iPad is used more often to be projected for the students to a large screen, it will not matter, as the video output will be identical.

Here is an in-depth video of a first-look at the iPad mini:

Finally, here is an interesting photo taken on the weekend at the local shopping mall comparing the crowd at the Apple Store to the crowd, or lack thereof, at the Samsung (Android) booth (photo courtesy of John Fong: @fongbao)