The app OnSong (official app link) is primarily a musician's app, geared towards band leaders and worship leaders in church. OnSong is a fully featured app, which includes connecting devices such as foot pedals for guitarists and keyboardists. I have been a user of OnSong since the iPad 1 days of 2010. As a worship leader in church, I have found it extremely useful to lead using this app. I prepare my sets and play the guitar and sing with OnSong. It just takes a quick swipe to the left to switch to the next song.

However, instead of reviewing the app from a worship leader's perspective, I am going to review this app with a slightly different take: as a conductor for a choir. A lot of what I used OnSong for can be transferred to a music teacher's needs for a quality app for displaying and reading music.

This was the second year that I was able to conduct the Christmas choir with my iPad. Last year I used Goodreader, which was great in that I could organize all the songs in the particular order that I wanted. I was able to use the tabs feature which was efficient.

This year I decided to try OnSong. It is primarily an app for musicians to create sets easily. You can easily import your songs into OnSong through Dropbox. Once songs are imported, they are saved locally on your iDevice (it works for iPhone too, though the screen may be too small to read from that far a distance). The advantages of OnSong over Goodreader in this instance was that I could simply swipe left to get to the next song, and that I could scroll up and down to get to the next page (instead of using tabbed browsing). As a conductor, I appreciated the ability to see the next page before normally having to wait until the last bar to “turn” it. I easily scrolled to the bottom of the page and was able to see the top of the following one.

Before the iPad, I always had to find little flashlights to securely attach to my music stand to be able to see the music. With the iPad, the light that is emitted directly from it obviously allowed me to use it instead of relying on another light source (The performances were in the “dark”, with lights shining on the choir, but not necessarily on the conductor.) Overall, I greatly preferred conducting with the iPad over sheet music. I was given a small speaking part in the musical, and was able to quickly switch over to Goodreader for the script to view it.

If you are a music teacher, I would recommend trying out OnSong. It costs $7.99USD, and Jason Kichline (the developer) is always tweaking it and improving it through updates.

OnSong is a universal app available for iPad, and iPhone/iPod touch.

Here are some screenshots of OnSong:

These are the sharing options for your set 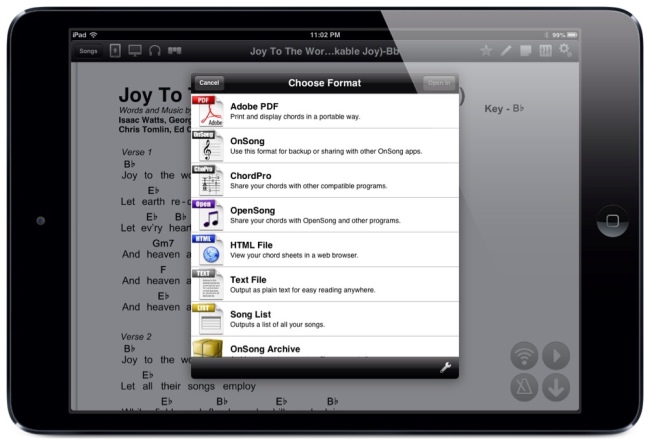 When sharing your set, you have a large variety of options on the output format

As a musician, I used to carry this huge binder full of sheet and chord music. I took pride in alphabetizing all my music, and always returned paper after each use. Now, the binder is sitting in my office, barely used at all. With Dropbox integration and OnSong, all of the contents are now ready to be used, right on my iPad. No more paper to be shuffled, no more wasted photocopies. As a music teacher, I would highly recommend OnSong. If any of you need any help with uploading through Dropbox, please don't hesitate to ask me.

Jason has generously offered me to give out a few copies of OnSong for free. So, if you are a teacher or song leader who think they would benefit from it, please let me know in the comments how. I will contact you by email if chosen. As usual, to qualify to be chosen, simply: