Skip to content
UPDATE! This app is no longer available, but check out a similar app, xRec, just released July 22: $1.99. 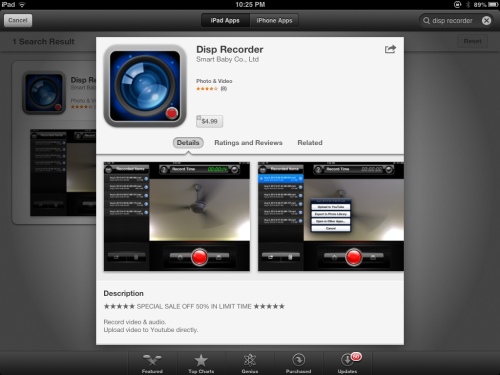 Unfortunately, the App was pulled from the App Store. It was re-released and renamed as Disp Recorder and the price was increased to $9.99. There is now a 50% sale for $4.99. Let me know if you had the app before. I tried recording something tonight, and it did not work after three attempts. In order to get the newly released app, I would have to purchase it again. US readers, let me know if the link below still works, and if the price has changed. The reviews in the App Store for it are decent, but many complain about lag.

This has been a pretty good week for finding great apps for the iPad. I was excited to learn of the app Display Recorder, a $1.99 app that will prove useful to myself and to others who wish to share video of their iPad or iPhone screens (iTunes link).

You are able to record what is shown on the screen, including switching between apps, and also dictate audio. (The audio recording can be disabled if you so choose).

Here is a short video of the app working on the iPhone. It is understandably not as “sharp” as the regular display, and there is a small lag resulting in a split second delay. However, I am quite happy with the results:

The above videos show the Display Recorder app starting and stopping the video. For those who would like to trim those sections off, a simple few steps on iMovie would eliminate them.

Playing the videos from within the app is easy, but you also have a few other export options:

You can open the video on whichever apps you have that are compatible. For example, I can save my videos directly to Dropbox, Goodreader, or Evernote: 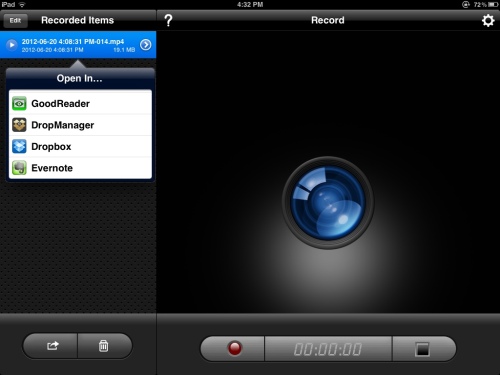 Teachers will undoubtedly be able to make god use of this app. Beforehand, this capability could be done on PCs, but now, it opens more doors for doing it straight on the iPad/iPhone and further supports the notion that we can indeed work sans PCs. Here are some educational uses of Display Recorder:

Any other ideas for this app in terms of teaching? Let us know in the comments!